Mentorship is a gift to pay forward

According to the Social Security Administration, 80 million people are expected to retire in the next 20 years, taking a massive amount of skills and knowledge with them. It’s no surprise that researchers are expecting a worldwide shortage of highly skilled, college-educated employees.

Take a look at your staff. Is your leadership pipeline ready for this mass exodus? If it’s not, it’s time to start thinking about mentoring.

Mentors occupy a special place in the hearts and history of their mentees. It’s an exceptional relationship that provides lasting benefits for both parties. For me, a discussion about the value of mentoring wouldn’t be complete without acknowledging the impact my mentor had on my career and approach to leadership.

Debbie Bush, now FOX19 Vice President and General Manager, was my mentor; she was a beacon of light and direction to me at multiple points in my career. Debbie herself has enjoyed roles as both a mentor and a mentee.

Debbie spent most of her early career as a reporter in a Wichita, Kan., TV station. As she thought about the next step in her professional journey, she took a chance and told her station’s general manager what she wanted to do next. She expected him to laugh; instead, he helped her strategize and think through how to make her dreams come true. She says the fact that he believed in her gave her the confidence and grit to rise to their challenge and do excellent work.

As her career progressed from reporter to management as a news director and beyond, Debbie says she continued to learn and be influenced by mentors. Those relationships shaped her approach to work and leadership in innumerable ways.

Even at this stage in her career, Debbie engages the help of a mentor to guide her. “My boss, Jeff Rosser, is incredibly smart and pushes me to be better,” she said. “I would not be the GM I am without working with him.”

But mentorship isn’t all about high fives. Debbie said that sometimes the advice her mentors would give was tough love, intended to get her off the wrong track and back on the right one.

From Mentee to Mentor

Fate brought Debbie into my life in 2007 when she was hired at WFIE in Evansville, Ind. This was her first time as a vice president and general manager of a TV station. I liked her instantly.

I was at a little crossroads myself. After interning with the station in my second (okay, third) senior year, I had just been hired as a web producer. Seeing something in me that I had yet to discover, Debbie began asking me what my next step was. We worked together to make a plan for my career and I worked hard to make sure that I measured up to her expectations. 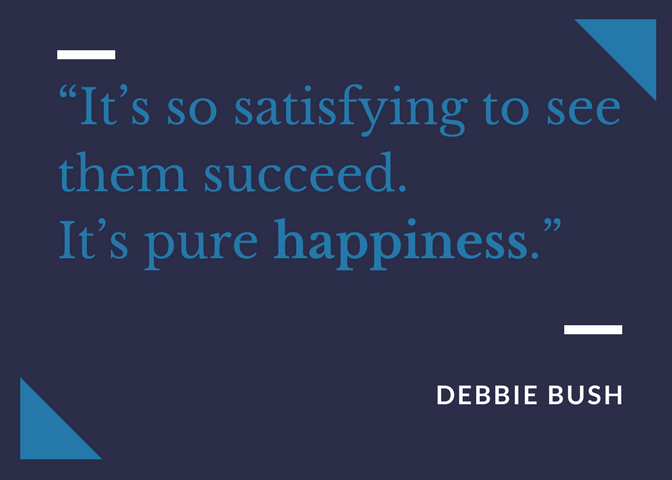 Being mentored by Debbie taught me what it takes to be the kind of leader that people respect and believe in. These hard-fought lessons have never left my mind.  To this day, Debbie is a trusted advisor and a dear friend who I know I can count on.

There’s only one thing Debbie asks of her mentees, “You have to mentor someone, too. You need to pay it forward.” I’ve been lucky to have just that chance. I’ve mentored many young professionals and I have enjoyed watching their careers blossom.

Although mentoring can be difficult,  Debbie said watching her mentees succeed brings her joy. “I think mentoring is worth every minute of your time. I can’t see not ever being there for people that want that kind of input.”

Article originally appeared in the Summer 2017 issue of the “NKY Business Journal.”